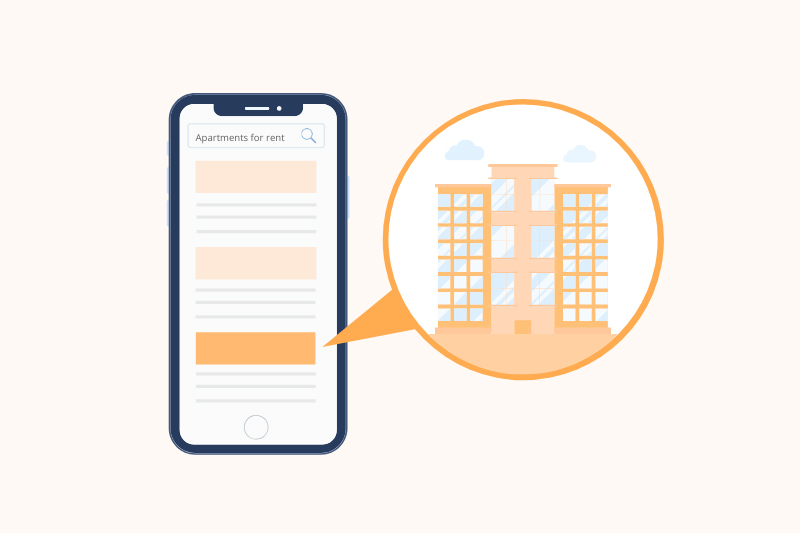 New Peak Leasing Season? How Operators Should Modify Their Strategy

Peak leasing season—the spring and summer months when leasing traffic accelerates—didn’t arrive this year as it normally would. Instead, a global pandemic made its way to the U.S. in March, causing most of the nation to shut down and subsequently throwing the economy off-kilter. Just as most multifamily operators were gearing up for a big spring leasing season, COVID-19 struck and the rental market suddenly froze. Now, nearly three months after the initial nationwide lockdown, apartment leasing is back on the radar.

Heading into 2020, fears about economic uncertainty loomed as the U.S. economy continued soaring at an unsustainable rate, and rent growth and occupancy rates began to stagnate. Nonetheless, forecasts were otherwise rosey for the multifamily industry. The strength of multifamily was apparent in the first couple months of 2020—with occupancy rates and rent growth holding steady—until early March when the pandemic emerged.

The immediate and widespread effects of COVID-19 on leasing resulted in a drop across several leasing metrics, including: average rents, new lease signings, and apartment search interest.

Average Rents
While March usually posts big numbers for multifamily rents, average rents began to drop. On March 26, 2020, the cost of an average apartment in the U.S. had decreased 0.23% compared to the previous week. RentCafe reported a 2.9% increase in March rents, which was down from the 3.2% rise from February and was the first time since 2016 that the percentage declined from February to March. Normally, rents would be growing that time of year. In the middle of what is typically peak leasing season, rents dipped nationally by 0.3% month-over-month.

New Lease Signings
Initially, leasing efforts during COVID-19 were centered around renewals as opposed to new leases—properties were simply trying to retain existing renters. This is evidenced by the huge drop in resident turnover, as renters cancelled or delayed move-out plans. When COVID first hit Dana Caudell, President of Property Management at Bainbridge said, “Retaining residents really helps with a lot of different costs of turnover…when you can keep existing residents there.” This focus on renewals also coincided with a decrease in new lease signings during the pandemic. Since mid-March, new leases dropped 16% compared to the same period in 2019.

Apartment Search Interest
National search trends also captured the rental market blip. For example, search interest in “apartments near me” and “apartments for rent” (and other related queries) accelerated early on in 2020 but then saw a sudden, steep drop. This closely coincided with the onset of COVID-19, and consequently, the U.S. economic shutdown which caused the unemployment rate to skyrocket. For reference, January and February 2020 indicated strong demand on par with 2019 levels during the same time period. 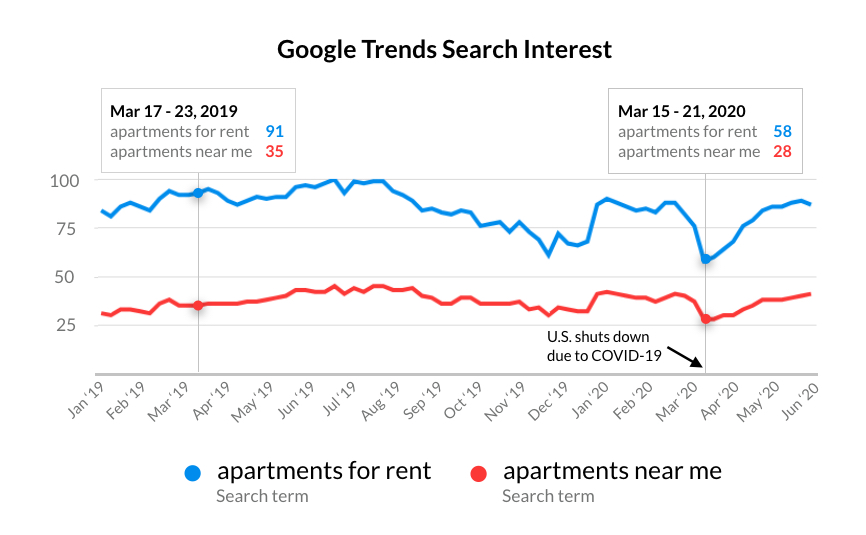 Statewide and city eviction moratoriums also helped prevent renters from losing their current housing, and government rent relief funds aimed to inject rent assistance into the hands of affected properties and renters. In addition, shelter-in-place orders forced many to simply stay at home and caused renters with leases up to find alternative living situations or extend their leases.

However, demand for apartments began to gradually climb back to pre-COVID levels by mid to late April. In the same Google Trends chart, we see that apartment search interest gained momentum throughout April and into May, with June holding steady so far. By the first week of June, searches for “apartments for rent” rebounded 54%, and “apartments near me” shot up 43%. 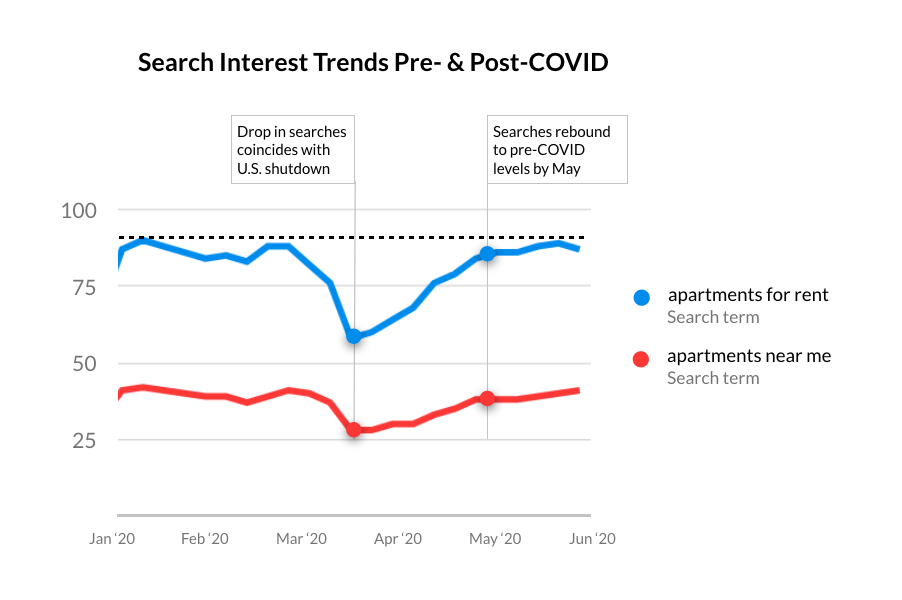 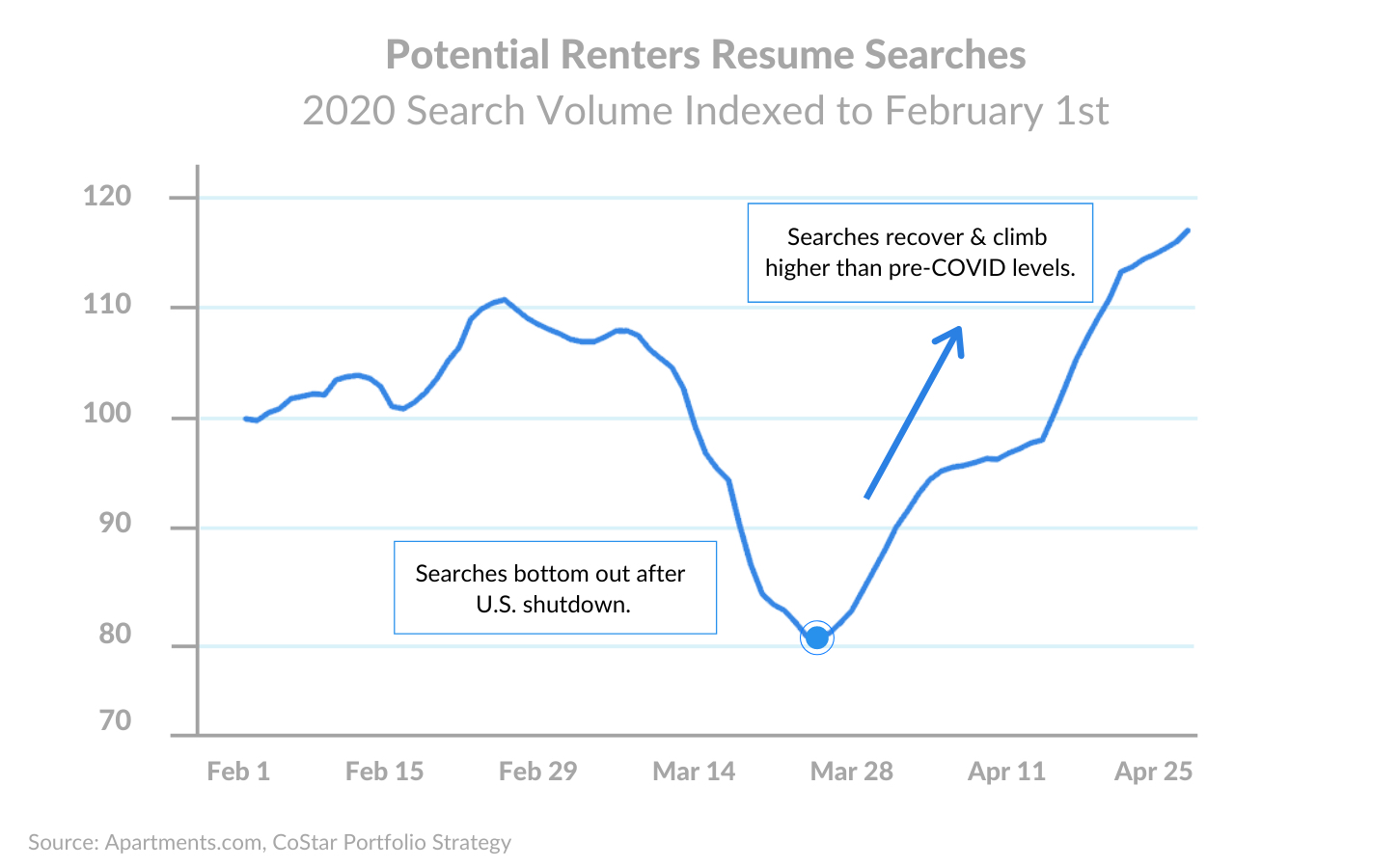 As far as leasing activity, more new leases were signed in May 2020 compared to May 2019 due to a surge in leasing activity in the latter half of the month, as a growing number of stay-at-home orders were lifted. Some operators are also reporting an uptick in renewals, with Bainbridge seeing 80% of residents renewing—much higher than the industry average of 40-60%. Healthy demand numbers in the second half of May combined with high retention and eviction moratoriums spell out higher occupancy rates. This trend will be studied closely in July, when federal unemployment benefits are set to expire.

Both search interest and new lease signings data suggest that leasing activity is mostly back on track as apartment hunting resumes.

So, if online apartment searches and lease signings have rebounded and will continue to increase as the weather gets warmer and the economy opens back up, what does this mean for apartment operators? It’s peak leasing season — albeit a different one than we’ve seen before.

How Operators Need to Modify Their Leasing Strategy

The pandemic has changed nearly every sector, and while multifamily has not suffered the immense losses that other industries have, the rental market has shifted. Apartment operators are no doubt aware of this, but many are still figuring out how to adapt to new and changing market conditions. As the rental market recalibrates and the U.S. returns to some semblance of normalcy, operators need to tailor their strategy to appeal to the modern renter. In other words, it’s time to prep for a new prime leasing season by revamping your leasing strategy.

The Best Lease Concession You Can Offer: Eliminate Deposits

One way operators can modify leasing operations during the 2020 peak rental season is by offering a strategic lease concession that speaks to the needs of today’s renter. In a shaky economy, there’s no doubt operators will be offering creative concessions and gimmicks to attract prospective renters. This drives up competition, but it also affects ad spend and lease value.

So, how can operators distinguish their property from competitors without losing money? Eliminate security deposits.

Eliminating security deposits and replacing them with lease insurance is a strategy that ensures operators don’t lose money in the process of generating more conversions and boosting occupancy rate. Instead, implementing a lease insurance program enables properties to market their communities as affordable (e.g.,“Zero Deposit Move-In”) in a time when nearly 80% of renters simply don’t have the funds to afford large upfront security deposits.

Multifamily is headed toward total deposit replacement, and many of the largest operators realize the benefits of lease insurance:

“Frankly, the security deposit is a thing of the past. Financially, they—along with alternatives like surety bonds —don’t make a lot of sense.” – Mark Stringer, Executive Vice President at Avenue5

On the property side, lease insurance increases conversions, boosts occupancy, and offers significantly more protection against rent loss and unexpected events (a standard plan provides over $5,000 of coverage). All of these value propositions can vastly improve your property’s success during peak leasing season, as operators don’t have to rely on costly lease concessions that create more bad debt and chip away at their profit.

Create A One-Click, Modern Leasing Experience—Or Get Left Behind

In addition to providing more affordable living options for renters, lease insurance creates a frictionless, one-click leasing process—both things the modern renter is looking for in a COVID world.

Technology was already transforming the multifamily landscape before the onset of COVID-19, but digital leasing has since accelerated. Operators no longer have a choice in whether to digitize leasing operations—the market now demands it. This includes conducting virtual tours, implementing digital leasing solutions, and eliminating security deposits, which are already a hassle to collect onsite and create even more friction when they must be collected virtually.

It’s also worth considering that unlike surety bonds and other deposit alternatives on the market, LeaseLock is fully automated in the leasing software meaning on-site teams don’t have to “sell” another product, which often results in a fumbled transaction that delays closing. Rather, leasing staff can focus on closing leases instead of selling surety bonds. Renters also have the option to opt out and pay a deposit if they prefer.

One thing multifamily operators have learned since COVID-19 is that the leasing process, and subsequently, peak leasing season, have changed. Today’s renters have different priorities—affordability, online leasing capabilities, and flexibility to work from home to name a few—and it’s up to operators to meet renters’ new demands.

The industry is notorious for being slow to adopt new technologies and processes, but as we’ve learned, the renter dictates the market—and renters demand simplicity and affordability during their apartment hunting. Are you ready for the new peak leasing season?

Download our 2020 Peak Leasing Playbook for exclusive insight on driving leases in the new environment.

Get the latest multifamily news & updates.